September 26, 2015 (San Diego) – An investigation by KNSD-TV Channel 7 , the NBC affiliate in San Diego, has dropped a bombshell regarding efforts to cover-up lax handling of nuclear waste and radiation leaks at the San Onofre Nuclear Generating Stations. Get the full report and the confidential documents here.

Hundreds of pieces of contaminated radioactive equipment were stored on both sides of Interstate 5, which bisects the San Onofre nuclear waste dump now under construction following shut-down of the facilities. Some were openly exposed to weather. 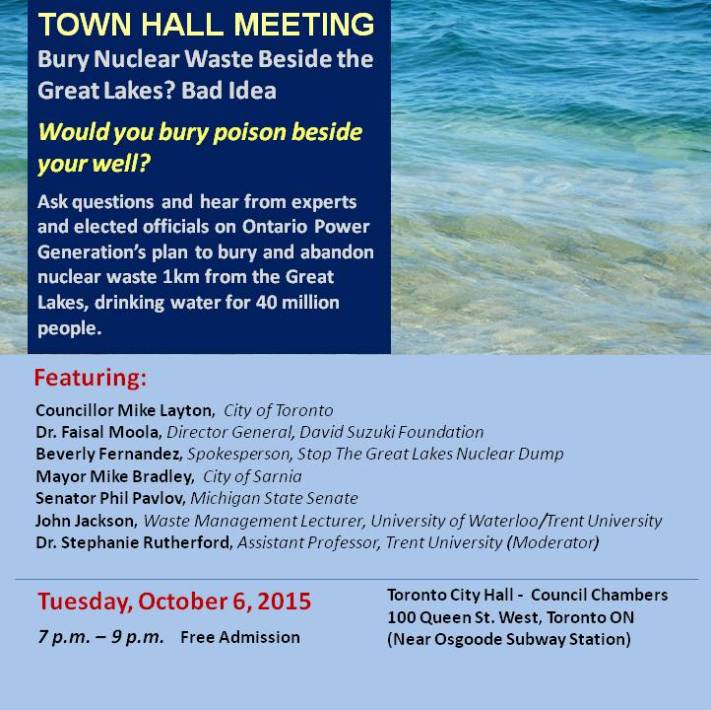 A semi truck caught on fire at the Honeywell Plant in Metropolis, IL Sunday evening. The truck was transporting uranium at the time. The Massac County Fire Department responded and put the fire out. They say the fire started in the engine of the cab of the truck.

“The tractor or cab part of a tractor trailer that was delivering natural uranium ore caught on fire in front of Honeywell Metropolis facility Sunday evening. Local firefighters responded and extinguished the fire. There were no reported injuries to the driver and there are no reports that the fire breached the trailer. Firefighters indicated the fire apparent started in the engine compartment of tractor.

The truck was not in the facility itself and there was no danger to the operations. The plant initially declared a plant alert and notified the U.S. Nuclear Regulatory Commission as per plant procedures. However, that alert status was later downgrade to plant emergency, which is the lowest alert status at the plant.”

The driver of the truck was not injured.

Switzerland’s Federal Nuclear Safety Inspectorate, which is examining proposals for the siting of two radioactive waste repositories, has requested further documentation from the national radioactive waste disposal cooperative Nagra. The request is expected to lead to a delay of 6-12 months to the timetable for selecting the sites. In January, Nagra proposed Zürich Nordost and Jura Ost in the third and final stage of Switzerland’s plan for selecting sites for two repositories: one for low- and intermediate-level waste and the other for high-level waste. Final site proposals for further investigation had been expected to be made by Nagra in 2017.

A 12-week consultation on proposals for assembling and presenting information on the geology of England, Wales and Northern Ireland to the public has been launched, the Nuclear Decommissioning Authority announced today. It said the consultation on National Geological Screening is “an important step to ensuring that the public plays a central role” in the UK’s plan to develop, build and operate an underground respository for radioactive waste.

Comments on proposals for assembling, and presenting to the public, information on the geology of England, Wales and Northern Ireland must be submitted online by December 4th.

In her mobile home in the Timbisha Village in Death Valley, Pauline Esteves remembers the mushroom clouds and white light ripping across the eastern sky.

A lifelong resident of the cracked desert, she had a front-row view of many of the 928 above- and below-ground nuclear blasts that cratered the earth at the Nevada Test Site. The explosions were her first connections to federal nuclear projects — but not her last. Today, she worries the federal government will place a nuclear waste dump at Yucca Mountain.

The site was selected in 1987 to store 70,000 tons of the nation’s spent nuclear fuel and other highly radioactive waste 1,000 feet under the mountain’s surface for at least 10,000 years. The design includes 40 miles of tunnels that would house waste in corrosion-resistant containers. It has since been defunded, but some politicians have not abandoned the idea of reviving it.

Standing at the chain link fence that blocks the access road to the repository site, Yucca looms over an elusive geological landscape, where appearance doesn’t always match reality.

Though it’s called a mountain, it’s more of a ridge. Formed by volcanic activity that began 15 million years ago, the peak marks the meeting place of two faults. The Nevada Agency for Nuclear Projects puts the yearly chance of an earthquake there around 1 in 70 million.

Though it’s in the middle of a desert, signs of water are everywhere. Above ground, parched washes and streams snake southward from ridges to coalesce in the basin in which Amargosa Valley sits.

Thanks to underground water, a small amount of radioactive material would travel southwest through washes, canyons, aquifers, fault zones, tufts and an intermittently flowing river. From the repository, the water would push into Amargosa Valley and, if the upward pressure from pumping in Pahrump were ever to cease, from there into Death Valley.

According to the recent Nuclear Regulatory Committee report, the peak radiological dose would be 1.3 millirems per year, which is far lower than the background radiation dose — the natural amount that is always present — of 300 millirems per year. In other words — not much. The report says the potential impacts would be “small.” But that is, of course, presuming an earthquake doesn’t rip open the repository, sending a much larger dose of radioactive material downstream. 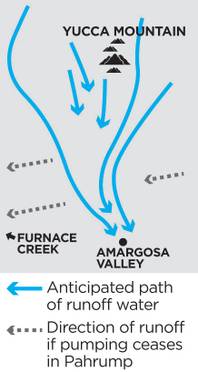 According to a recent report, water would carry radioactive material from Yucca Mountain to Amargosa Valley.

South Australia, a rustbelt state that’s 60 percent desert, is staring into the abyss.

It is grappling with the highest unemployment in the country and a steady outflow of people to other states. And in 2017, General Motors Co. will close its Holden factory, ending more than 50 years of automaking in the Adelaide suburb of Elizabeth, where one in three are already without work.

Options for State Premier Jay Weatherill to stem the decline are dwindling and he’s looking at all of them, even the possibility of using the state as a dump for the world’s nuclear waste. Perhaps more than anywhere else in the country, this state in the heart of the continent epitomizes the hard choices Australia faces in the aftermath of its 10-year mining bonanza.

“They know there’s a crisis and they even know the date on which it’s going to arrive,” said Craig Emerson, a former trade minister who convened a National Reform Summit last month to try to spur lawmakers into action on the national economy. “It’s like a laboratory, what’s going on over there.”

South Australia gained little benefit from the mining boom that enriched the mineral-rich states around it. Instead it suffered from the side effects of a soaring currency and rising wages. Weatherill estimates 13,000 jobs are at stake in the automotive industry.

Weatherill announced in February a royal commission to look at the role the state should play in the nuclear industry — from mining to enrichment to energy generation and waste storage. The commission will make its recommendations by May 2016. The International Energy Agency has estimated nuclear generation capacity could rise 60 percent by 2040, and the cumulative amount of spent nuclear fuel generated, including high-level radioactive waste, could more than double over the period to 705,000 metric tons.